Anatomy of a Million Dollar Campaign 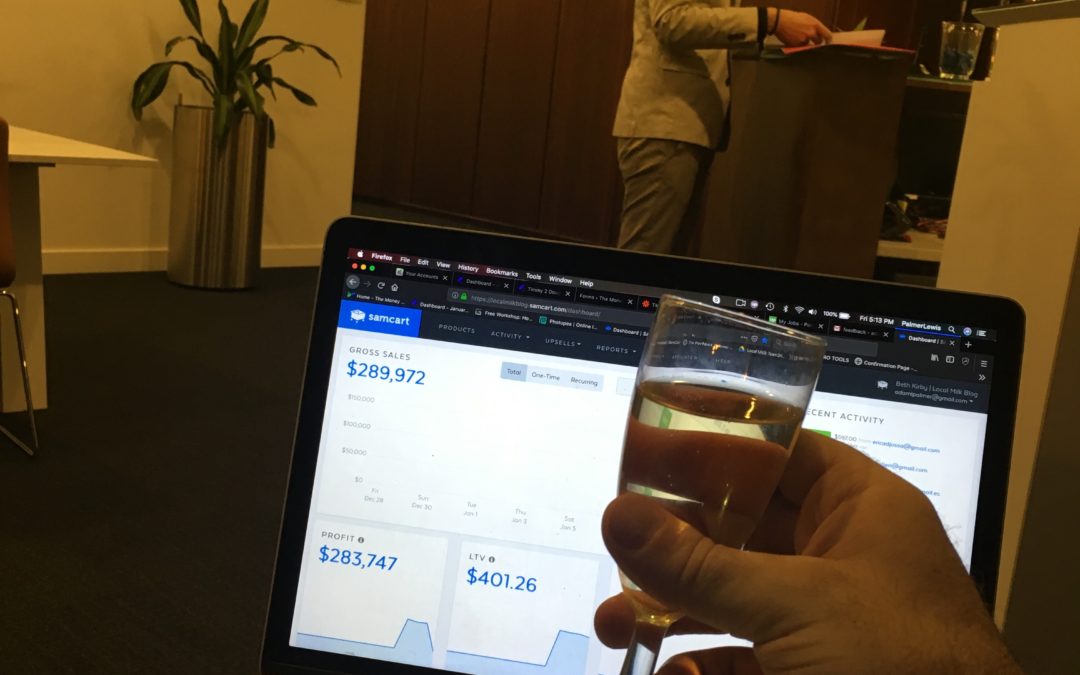 Alright, it wasn’t exactly a million dollars, but it was pretty damn close.  We did it in about a week’s time, so I’m going to go out on a limb and say if we launched this again this year, or turned it evergreen, we’d go far beyond 1 million dollars. And that’s definitely the plan!

Be that as it may, I just wanted to take some time and highlight one of the most successful (and lucrative) gigs I’ve ever done on Upwork.

There were so many lessons learned with this project that I wanted to go through the whole thing and lay the info nuggets wherever they made sense in conjunction with what I did.

Hopefully you enjoy and learn some shit.

Let’s break down the strategy.

We wanted to create a live webinar series that had a unique and timed special offer, then put together a Mid-Cart special bonus and a Final Cart close.

You get all that?

Below is something that I created to demonstrate it. I didn’t want to use the exact same flow chart we created because that wouldn’t be cool to share, but this is something very similar.

Let’s break down the pieces, shall we?

First and foremost, we needed to get people to register to the webinar. This may sound simple, but unless you have something compelling, people will brush it off and get on with their lives.

One of the main components you need for this to work is a traffic source. Fortunately for this client, she had two Aces in her sleeve. And I mean Aces.

First was the fact that she had about 770,000 followers on Instagram. That’s a no joke amount of people, and her following definitely provided the critical mass necessary to make waves.

But that’s not all! She had also been planning this event for quite some time and was intelligent enough to start building a list of email addresses over the last several years.

This is amazing. She had a little shy of 80,000 email addresses that she could send an email to in a split second. She now has over 110,000 people in her Infusionsoft. Super badass.  That’s more than even some of my more well-known clients!

Since these people were already in her Infusionsoft account, there was no extra work of importing bs, so we could immediately start sending campaigns.

And they were already warm because she had them go through a welcome series when they opted into receiving emails from her.

Right off the bat, we had a way of connecting with a pretty massive amount of people.

I can’t reiterate how important this is for a client to have if they have massive expectations for their projects.

If they DON’T have a list of potential customers, they’ll need to think about how they’ll acquire the leads to send to the registration page of the webinar.

Some of these other methods include:

And others… that I’m not going to get into for this post.

Once we had the funnel built out in Infusionsoft, we sent the people through the first part of the campaign.

We then emailed her list a series of emails about the webinar and the emails worked extremely well with getting people to register.

We had 5 different webinar times available within 3 days of the emails.

I thought this was massively ambitious at first, but then it dawned on me how important each one of these webinars were.

Not just because each one averaged out over $50,000 each in sales, but because practice makes perfect.

Each time she did a showing, she improved tremendously, and we were able to whittle down the webinar into a conversion machine. Meaning that people were buying what she was selling.

And I’m so glad we did, because EVERY time we aired a live showing, something would get fucked up.

After the user registered, we had another series that was created to remind people about the webinar, get people into the habit of opening emails, build authority, and get people excited for the webinar.

This is super important because people have a lot of shit going on. And if you make an appointment one or two weeks out, chances are you’re going to forget all about it.

That’s why you want to fully map these campaigns out first, so you don’t miss any crucial pieces that may butcher your client’s business.

Here’s an example of that sequence:

This is me at my Regus office in Brussels holding it down. Or trying to anyway. Like I mentioned earlier, there was always something crazy happening during every webinar showing.

The first one, we had 7000 people register and the software we had only allowed 500 people in.  The software had capped attendees at some point, even though it was completely different during the last several years we’ve been using it.

Then there were… coughing fits, software problems, internet bandwidth issues… and a host of other dumb, unpredictable issues.

But we made it through and that’s because no one on the team gave into any number of the problems.  Instead, we took the punches, adjusted, and hit back harder.

That’s what you HAVE to do if you want to make it into the big leagues. That’s why simply reading one instruction manual and believing you know something is horse shit. To be good at something you need cold, hard, rough, dark experience.

You have to take the punches and you have to figure out how to block and punch back. Do you think there’s one boxer in the world, that hasn’t gotten punched in the face? Of course not. Punches to the face always suck. And you learn really fast that you want to keep your hands up and parry when you can.

And luckily, my client knew this. This was her first time launching something like this, and she was smart enough to not expect perfection.  She just expected greatness. And you can achieve that without being perfect.

Any client that’s going to expect perfection, and not know how to roll when shit goes sideways is a fucking idiot. When you put that kind of pressure on your freelancers/assistants/employees etc…. they start to operate under duress and fear.  Not love for the project. And that’s the difference in a lot of projects that I see.

I wanted to stay up all night and help her because I LOVED this project. I didn’t carry that resentment with me that spoils even the most lucrative of projects.

Make sure you love your client and love the product they are putting together.

There’s probably a lot more that I can discuss regarding the format of the webinars, but I think I’ll just make a separate post for the specifics of the format and link some great examples at the bottom of the post in the comments.

But yeah, like I stated earlier… she made over $50k-$60k for each performance and there were 5 webinars, so do the math.  Plus, we had payment plan continuity, which means that people will also automatically pay next month and the following month for the product.

And what was the product?

It was a $600 digital Bootcamp course.  4 weeks of dripped content that would go to all the people that purchased, plus some bonus courses if they purchased during the webinar.

Moving on from the webinar, the next phase of the project was the Mid-Cart Special.

This part of the funnel was a special that we were offering if the people purchased within 72 hours after the first showing of the webinar.

This was promoted to the people that registered to the webinar in the form of emails and through Instagram.

This is really where email targeting becomes something you want to pay attention to.

Using Infusionsoft, we were able to know whether people….

This ties together perfectly with the tags you’re able to produce on Webinarjam.

The reason why this is important is because you want to approach each person a little differently. When you can do this effectively, it will significantly improve conversions.

One of the greatest things about Infusionsoft and other popular CRMs, is that you program goals into the campaign, so you’re able to automatically email and remind the users about the product until they take an action.  When they take the action, it will automatically pull the user out of the campaign instead of annoying them when they already made a purchase.  This is the heart of automation, so you should get a good grasp on how that all works.

We accumulated a large chunk of sales from this portion of the series and it was a nice bump in the middle of the cart being open.

If we hadn’t offered this special, the only other surge would have been when the cart was closing — but who wants that? After that cart is closed, the promotion is over — but is it?? More on that to follow.

Let’s first talk about the final arch of the series. That’s the cart closing.

This is when the rubber meets the road for a lot of the tire kickers. Now you’re able to throw some massive scarcity towards them by letting them know that the course/membership won’t be available if they lolli-gag any longer.

This is when people take the most action. Up until now, the only areas we were able to throw scarcity at them was with bonuses. I think bonuses are always better than discounting your product. Otherwise, you devalue yourself.

I prefer to only discount items if they are order bumps or upsells – Check out some examples of order bumps and upsells.

If you look below, you’ll see all the sales that piled through during these final hours of the promotion.

I mean they were literally pouring in.  It was so fun to watch.

But it wasn’t over.

After we finally closed the cart, we were getting hit up like crazy with requests by people saying that they didn’t have the time to check out, had banking errors, their internet failed…. etc…. etc…. etc…

To alleviate their angst and issues, we decided to throw an encore their way, which allowed the cart to be open for one more day.

And boy oh boy, did they pour in again. The one encore email we sent literally brought in $50,000. Not bad right?

Take a look below.

All in all, the reason I loved this project so much is because I was able to show such a badass return on investment for my services. It feels good to know that you were able to help make a profit. When you can do that, you can charge whatever you want.

If you aren’t concentrating on creating an ROI for your services, you will be stuck in a low wage position.

I hope you got a lot out of this wrap up! Stay tuned for more info-nuggets.

← Another year as a freelancer in the books.Upwork Connects, Industry Profiles – 2019 Upwork Changes →